Water purification, Arcata Marsh. Arcata uses restored and constructed native wetland communities to help filter contaminants and treat the city’s wastewater before discharge into Humboldt Bay. The marsh, which is on the Pacific flyway, has hosted over 300 bird species.

Healthy wetlands and other native plant communities slow water and absorb its energy, allowing water to percolate to soils and aquifers, rather than running off as floodwaters. Plant roots, shoots, and leaves absorb, filter and remove pollutants such as metals, viruses, bacteria, pathogens, oils, excess nutrients, and sediment so the clean water is delivered to aquifers and surface waters. Water captured and stored in plants, soils and root systems helps to secure and stabilize water supplies.

In New York State, protected watersheds in the Catskill Mountains purify and deliver 1.4 billion gallons of water to nearly 9 million people in New York each day. This avoids the need for costly filtration—a cost estimated at between $8.0 to $10.0 billion to construct a water treatment facility and approximately $1.0 million each day to operate and maintain the plant.  Similarly, 2.7 million people in the San Francisco Bay Area receive 85% of their water from a reservoir located inside Yosemite National Park. 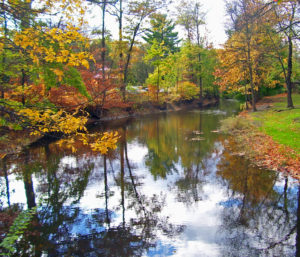 New York City has one of the few sources of natural, unfiltered water in the U.S. It is the largest water system in the country operating under an approved filtration avoidance waiver. – UC Davis

New York City’s water system moves over a billion gallons a day, nearly all of it unfiltered. A major investment aims to keep it that way. – New York Times

This 2009 paper provides a historical perspective of the linkage between forest soils and water quantity and quality over the past century. It also makes predictions about research directions in the area of forest soil and water quality linkages. https://doi.org/10.1016/j.foreco.2009.05.027

A Lawrence, KS conservation group has received a nearly $80,000 grant to restore native plants and habitat along the Kansas river to improve water quality.